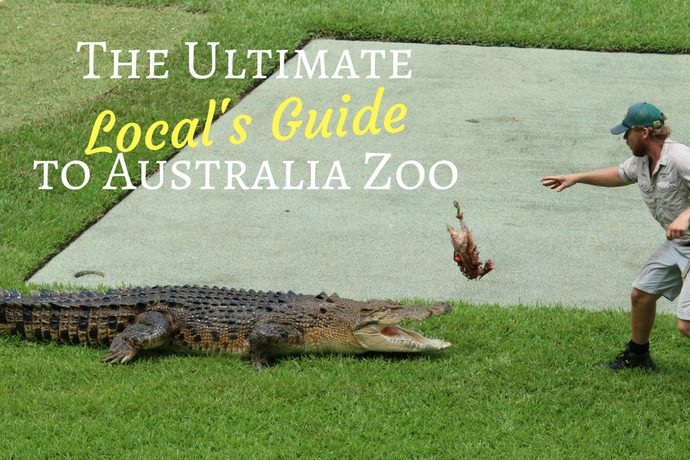 I am going to be blunt – crocodiles scare me.  Having visited Far North Queensland and the Northern Territory multiple times, I have a healthy respect for these prolific apex predators.  If you want to learn more about crocodiles then Australia Zoo is the iconic place to visit as a result of Steve Irwin’s popular Crocodile Hunter TV series.  Unfortunately Steve is not with us anymore, but his family continues to promote wildlife conservation through their Wildlife Warriors charity.

When my family recently decided to spend a week on the Sunshine Coast to visit with family, our number one activity to do while in the area was to visit Australia Zoo for the first time, and in particular to see the iconic crocodile show in the Crocoseum.  The day after we arrived the weather was perfect so we decided to proceed with our visit.

I would like to help you to plan your own visit to Australia Zoo, with the benefit of a local’s perspective.  While we ourselves are not locals, my sister in law lives on the Sunshine Coast and had purchased a season pass in the previous year so had visited many times.  My sister in law visited Australia Zoo with us and was therefore able to share many tips to enable us to make the most of our visit.

Disclaimer: This article contains affiliate links.  That means that if you make a booking after clicking on a link it may mean that we receive a small commission at no extra cost to you.  Thank you!

One of the things I really liked about Australia Zoo is that multiple animal encounters are included and available for everyone.  In most other zoos in Australia you would need to pay an additional fee above your ticket price to get up close and personal with one animal, let alone many animals.

Also the Australia Zoo shows are quite unique.  We attended the Wildlife Warrior show in the Crocoseum and while the crocodile demonstration was amazing as expected, we were quite surprised to see the bird displays which were great to watch (but difficult to get a good photograph!).

Australia Zoo itself is a pristine zoo, which is very well tended and maintained.  The wildlife all appear to be happy and well looked after.  We visited around 75% of the zoo animals over a 4 hour period, and if we had decided to stay longer we would have easily been able to see the rest of the animals.

As a result we all really enjoyed our visit and would definitely recommend it to you.  Our children enjoyed charging around to visit the animal enclosures and also enjoyed seeing the Wildlife Warrior show.

Australia Zoo is a long standing Irwin family business which has existed on the site in Beerwah, Sunshine Coast since 1970.  It started life as the Beerwah Reptile and Fauna Park which was established by Steve Irwin’s parents.  During the 1980s Steve Irwin worked with the Queensland Government to capture and rehouse crocodiles, of which over 100 were either relocated or rehoused.  Steve took over management of the then expanded park in 1991, the same year he met an American tourist, Terri Raines, who he subsequently married in 1992.

The couple subsequently went on to start filming wildlife documentaries, which led to the creation of The Crocodile Hunter series which led to Steve Irwin becoming world famous, and then going on to produce many other successful shows.

Sadly, Steve Irwin died in 2006 after being hit in the chest by a stingray’s barb while filming and snorkelling on the Great Barrier Reef.  His family are continuing his legacy at Australia Zoo with the zoo continuing to grow in size and increasing the number of animals and wildlife on display.

The Irwin family can periodically be seen at Australia Zoo – keep an eye out on their webpage to see if they will be meeting the public at the time you plan your visit.  They often run school holiday programs where the Irwin family are in attendance.

Australia Zoo standard ticket prices are as per the below table.  You can easily pre-purchase Australia Zoo tickets and tours online through Get Your Guide.

Additional animal encounters and tours are also available, including tours of the Australia Zoo Wildlife hospital and private tours.  For children aged 4-15 years old there is also the Zookeeper for a day program which runs during school holiday periods.

Click here to check out and book your Australia Zoo ticket, transfer and tour options through Get Your Guide

The latest Australia Zoo Map is available on this link.

Australia Zoo is easy to walk around, and they also have a mini train which picks up and drops off on a defined route.  In our case we progressively walked to the furthest end of the park and then caught the train back to the entrance.

Australia Zoo has a large range of animals to see.  They have a great range of Australian animals including many crocodiles (as you would expect!), snakes, lizards, koalas, emus, kangaroos, parrots, wombats, dingos and Tasmanian Devils.  They also have animals from Africa and Asia, including rhinos, cheetahs, lemurs, tigers, giraffes and zebras.

All of the animals live in spacious enclosures and appear to be very well tended.

Australia Zoo is open from 9am to 5pm daily and is closed on Christmas Day.

Australia Zoo is located in Beerwah, which is 75km north of Brisbane in Queensland.  Beerwah is part of the Sunshine Coast, and has close proximity to Noosa, Mooloolaba, Caloundra and Maroochydore.

How to Get to Australia Zoo from Brisbane, Gold Coast and Sunshine Coast

Options to get to Australia Zoo from Brisbane include:

Click here to check out and book your Australia Zoo ticket, transfer and tour options through Get Your Guide

Hotels and Motels Near Australia Zoo

There are a huge range of different hotel and motel options near Australia Zoo and you can choose whether you want to stay close to the beach – think Caloundra or Twin Waters, or up in the mountains behind the Sunshine Coast – think Maleny and Montville.  Or you can stay in the middle in Beerwah and close to the Glasshouse Mountains.

My recommended hotel and motel picks are:

For caravan parks and camping options near Australia Zoo the best options are:

Other nearby caravan park and camping options include:

If you can’t get to Australia Zoo there are many other great zoo options in Australia with Australian animals (and some with crocodile shows) with my recommended options as follows:

Disclaimer: This article contains affiliate links.  That means that if you make a booking after clicking on a link it may mean that we receive a small commission at no extra cost to you.  Thank you!