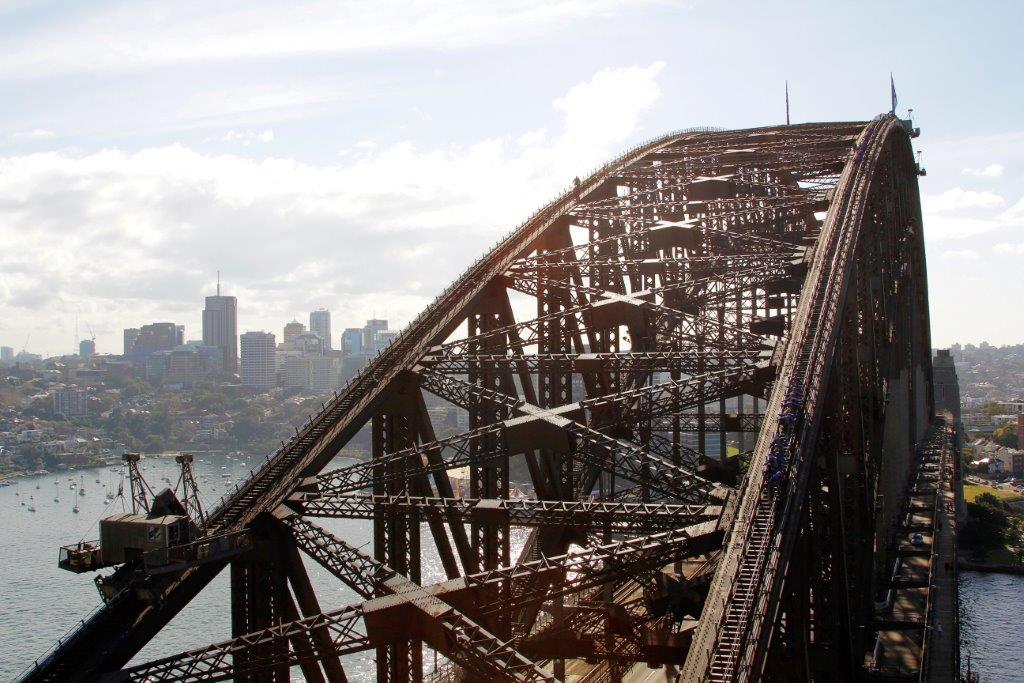 The gorgeous autumn sunshine shone brightly across Sydney Harbour.  The views from the Sydney Harbour Bridge walkway were of a city at play, both on the water and out and about to make the most of the beautiful weekend weather.

After recently relocating back to Sydney we had been waiting for the right weekend to revisit some old haunts in the Sydney city area.  After a couple of weekends with poor weather we finally came up trumps and decided that we were ready.

Taking advantage of the amazingly cheap Sydney ‘Sunday Funday’ public transport fares we caught an early train through to Milsons Point on the northern end of the Sydney Harbour Bridge, ready to commence the walk across the iconic Australian landmark.  Upon arrival we unexpectedly discovered that the Kirribilli Markets were in full swing which necessitated a quick stop for some cosmopolitan brunch.  After snacking upon a combination of Vietnamese, Italian and Turkish delicacies we enjoyed browsing the market with its eclectic combination of stalls.

We then climbed the steps to the start of the Sydney Harbour Bridge walk on the side closest to the Sydney Opera House.  We gently ambled along the route, stopping regularly to take photos and just enjoy the day.  Our children happily strolled with us and asked lots of questions which was great!

When we reached the Sydney Harbour Bridge Pylon Lookout we went in to have a closer look at how the Sydney Harbour Bridge was constructed which was a fascinating journey.  The museum houses many remnants of the bridge construction, including descriptions and photos of how the two halves of the bridge were constructed independently from each side until they were finally close enough to be joined.  Imagine being in charge that day and hoping it would all work as planned!  The history of how the bridge was funded and the design selected was also fascinating.

A great aspect of the Pylon Lookout is that you can climb the tower all the way to the top (only a couple of hundred steps…) where you go outside and take in the views in all directions.  Of interest is that you can have a close look at the people who are doing the BridgeClimb activity, as well as have a better look at the upper level of the bridge itself.

We then continued the walk through to The Rocks exit, where we traversed the 100 or so steps down to street level.  We then walked back underneath the bridge until we reached the Dawes Point Park where we sat and ate our packed lunch, looking out over Sydney Harbour while our children played in the park and climbed all over the old cannons on display.  We then walked around the foreshore before cutting back through to The Rocks Market, which offers a great selection of unique Australian souvenirs and food options.

After exploring the market we then did the less interesting walk along George St through to the Sydney city area.  As the monorail was about to shut down we wanted to have one last ride, although we quickly discovered that many other people had the same idea.  After squishing into the monorail like sardines we did two loops around before finally getting off in the Chinatown area.

We have a long tradition of visiting the BBQ King shop to purchase Chinese style BBQ Pork and duck to take home to have for dinner.  We finally walked with our now less energetic children to the train station to head for home.  And the Chinese duck and BBQ pork was a lovely way to finish our big day out in Sydney!

You may also be interested in the following articles: