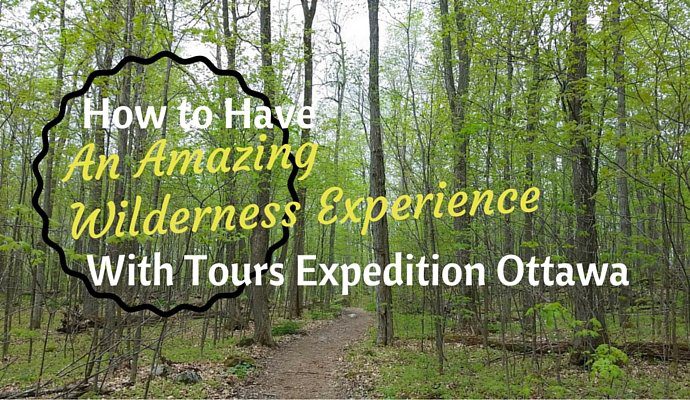 As we hiked through the gentle undulating trail through the quiet maple forest I felt pleased that I had made the effort to explore outside the city of Ottawa in Canada.  After a week of significant long distance travel and high intensity activities the hike was a perfect option to refresh and take the opportunity to see a brief glimpse of the Canadian wilderness.

Ottawa in Canada is a beautiful city in the Spring.  On a short visit it would be very easy to spend your time exploring the city area and never venture further afield, but I decided that if I was only going to be visiting Ottawa for a few Spring days that I definitely wanted to get out of town to explore the natural environment outside town.

As I did not have a vehicle I started my search for options by researching local day tours via the Ottawa Tourism website.  I am not a fan of larger group tours, so when I spotted the option to do an 4-6 hour affordable solo or small group tour in the local area with Tours Expedition Ottawa I decided that it looked like a good option.  After checking the reviews of the business on Trip Adviser I quickly fired an email off to check availability for the one day I had available to explore.

Tours Expedition Ottawa offers bespoke adventure day tours around the Ottawa area for up to four participants.  Depending on your preference and the season you can either hike, cycle, go canoeing, go skiing, snow shoeing, explore the local towns or a combination of these activities.

Setting up the Tour with Tours Expedition Ottawa

The owner of Tours Expedition Ottawa, Paul Proulx, quickly responded with a confirmation that he was available to conduct a solo tour on the day I was available.

With consideration of the weather forecast indicating possible showers Paul suggested a couple of options which might suit, and also confirmed that he had wet weather clothing available.  I selected the option to go hiking in Gatineau Park which is a short distance west of the township of Ottawa and to visit Chelsea village, as I had previously read about Gatineau Park and was very interested to visit.  We then interchanged emails to agree a time to depart and my hotel pick up details.

Paul also delivered a package to my hotel the next morning which included the participant agreement and some brochures about our planned trip.

Getting Started on the Tours Expedition Ottawa Tour

On the day of the tour I woke up to see a grey overcast sky with a weather forecast for possible showers that afternoon.  Paul arrived early and sent me an email to let me know that he was there, and I met him in front of the hotel.  He gave me his card to ensure that I had confidence that he was the person I had arranged to meet.

We loaded up in his vehicle and headed off.  We made a brief stop at Paul’s local café of choice to select our sandwiches and drinks for lunch.  Lunch is included in the tour cost so Paul paid for the food and I looked forward to a delicious lunch.

We then proceeded to drive to Gatineau Park, which is located only 20-30 minute drive from the centre of Ottawa.  Along the way we got to know each other and Paul pointed out some of the local features of interest.

Below is a map showing the route we took for our big day out!

After passing through the small gateway village of Chelsea we entered the park and first made a stop at a lake to look at the view and spot the beaver mounds.  I have never previously visited an area where beavers are present so it was really interesting to see their creations.  We then continued on and whilst passing many many cyclists along the roads we arrived at our first stop, the car park at the start of the Lauriault hiking trail.

The Lauriault hiking trail is 3km long through gently undulating hills which provides access to the places where wild garlic thrives, Mackenzie Estate and Bridal Veil Falls.  We were there at a great time of the year as the trilliums were in bloom – which only occurs for a few weeks each year.  We saw many white and red three petal trillium blossoms as we walked the trail, along with great swathes of protected wild garlic plants.

The only downside to the trail was the presence of many small biting insects – if you were moving it was OK, but every time you stopped they made their presence felt.  Paul provided me with insect spray before starting the hike which seemed to be mostly effective as I had a lot less insects come and visit when we periodically paused on the trail.

We started with a short side trip to see Bridal Veil Falls, which happened to coincide with a very large and noisy Scout troop!  I am also a volunteer with Girl Guides in Australia so it was great to see the families out making the most of the day to explore the park.  Bridal Veil Falls was a lovely small waterfall which was a great option to get started on our hike.  We quickly moved on to get ahead of the Scouts and were pleased to be able to hike in a bit more peace and quiet…

We were able to see the views across the local farmland and also the Ottawa River from the top of the hill we climbed.  Towards the end of our hike we experienced some light drizzling rain which was not a problem as we were both wearing rain jackets.

We also briefly stopped in to explore the Mackenzie Estate, which happened to be where the Scout troops had stopped for lunch.  I loved the ‘local ruins’ which had been set up and were enticing many of the children to play.

After returning to the car park feeling like we had had an enjoyable hike and that we had definitely had some good exercise, we then travelled in the vehicle to our lunch stop.  To escape the pervasive insects Paul had selected a venue called the Shilly-Shally Shelter.  We parked and then had to walk approximately 500m to the shelter, which turned out to be a small enclosed hut with a fireplace located beside a beaver created pond area.  I explored around the hut while Paul set up our lunch on the picnic table inside.

After attempting to light the recalcitrant fire Paul explained that there was not a big enough temperature differential to enable the flue to properly draw the fresh air – it was pretty warm so was not a big issue.  In winter the hiking trails are used for skiing and snow shoeing and the hut was a good place to stop and warm up, and also provided shelter in the event of bad weather.

Paul provided the sandwiches and drinks we had purchased, as well as a variety of picnic supplies include the Canadian favourite cheese curds.  I had tried them in poutine while in Ottawa, and Paul explained that when they are fresh that they need to be kept at room temperature, otherwise they turn hard.  When they are very fresh they are squeaky to eat – ours were a few days old so had lost the squeaky texture.  They were still yummy and were quite a firm cheese option.

The rest of our lunch was very pleasant and relaxed and well earned after our hike.

Unfortunately while we ate our lunch some heavy rain decided to come down in earnest – and it was obvious that this was now a serious amount of rain which was likely to continue.  While Paul had initially planned to take me to another hiking area in Gatineau Park, he suggested that we switch to an alternative plan which was to explore two of the local townships.  I agreed, and when the rain paused we quickly packed up and headed back to Paul’s vehicle.

Paul suggested that we drive to Wakefield.  It was a pleasant drive with the bulk of the route alongside the Gatineau River.  We did a brief stop for Paul to fill up his natural spring water bottles from a busy local natural spring, and then continued on to the Wakefield covered bridge.  While it was still raining it was a lovely place to visit and see the power of the swollen Gatineau River.

After a short stop in to see the lovely Wakefield Mill we then stopped in the township of Wakefield so I could browse in a few of the local shops.  I really enjoyed visiting the local indigenous Khewa shop to see the local art and craft items.

We then drove back to Chelsea and our first stop was the Gatineau Park Visitor Centre which has an exhibit showing the local wildlife in the area.  It was fascinating to see the exhibition – the beavers are definitely much larger and the black bears are smaller than I expected!  Out the back is an area where Paul advised that he is often able to see beavers in action, but unfortunately they were not active on the rainy day we visited.

Paul then took me to the amazing Biscotti & Cie Café for an indulgent afternoon tea stop.  I can confirm that the hot chocolate was amazing, and I had to ask them to split the massive slice of cheesecake because it was way too big for a single person to eat!

We then started the return trip to my hotel in Ottawa which was a short 30 minute drive from Chelsea.

Overall I had a great day out, and I really enjoyed being on a solo tour where the itinerary was able to be adjusted to suit the weather conditions.  Paul has a vast knowledge of the local area and does a great job to plan the itinerary and then deliver on a great day out, so I would definitely recommend that you book this tour option.

If you are interested in checking out a winter camping option in nearby Ontario I suggest you check out Winter Camping in Ontario: A Weekend at Windy Lake Provincial Park by Traveling Mitch.

The standard tour rate was paid for this tour by Anne.