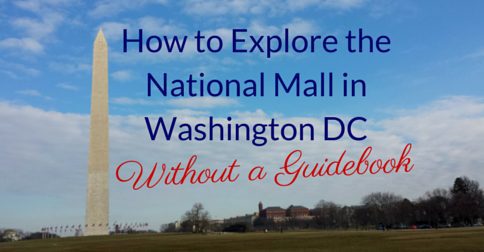 It felt somewhat surreal as I took in the amazing blue sky view over the National Mall from the steps of the Lincoln Memorial in Washington DC.  Having a short window of time to explore such a significant location had been an unexpected surprise and a real pleasure.

My opportunity to explore Washington DC arose when a small window of time became available on a business trip.  While I am usually a seriously obsessed travel planner on this occasion I stepped up to the challenge with only a brief glance at a map and a short conversation I had with the passenger beside me on the plane just prior to arrival.  I had a grand total of three hours to explore before nightfall and I was definitely going to make the most that time!

What is the Heart of Washington DC?

If you only have limited time to explore a place then learn what defines that place and go there.  In my case I quickly worked out that the National Mall is the defining part of Washington DC.

For those of you (like me) who have no idea, the National Mall is an approximately three kilometre / two mile long and narrow swathe of grassy parkland in the centre of Washington DC which is surrounded by the White House (the home of the president of the USA), the Capitol Building (the main house of parliament for the USA), a huge number of significant museums, and monuments galore both inside and around the edges.

The National Mall and Washington DC are also famous for the cherry blossom trees which bloom in the spring, with the highlight being the Cherry Blossom Festival from late March to early April of each year.  The original 3,000 cherry trees were a gift from Japan which were planted between 1912 and 1920.  During my winter visit the cherry trees were all in hibernation, but I still enjoyed walking through the stark cherry tree lined walkways.

The centrepiece of the National Mall is the Washington Monument, which is a 170m / 555 ft obelisk which is the tallest structure in Washington DC.  Obelisks were originally created in Ancient Egypt, and they consist of a tall four sided tower with a pyramid on top.  The easier option is to just look at my photo below J.

The Washington Monument was built as a tribute to George Washington, the first president of the United States of America over 1789 to 1797.  The first phase of construction occurred from 1848 to 1854 to a height of 150 ft but work ceased due to lack of funds, and were then further delayed by the Civil War.  The second phase of construction commenced in 1879, and the completed monument was finally opened to the public in 1888.  As a result of the two phases of construction you can see that there is a noticeable difference in the colour of the stones.

There are many other monuments to Presidents of the United States of America in and around the National Monument – the other monument which most people visit is the Lincoln Memorial which is located at the western end of the National Mall past the massive reflection pool.

After checking in to my hotel I quickly changed into my winter gear and headed out to explore.  Fortunately I was staying only a few hundred meters from the White House, so I headed in that direction.  As I left my hotel the crisp winter air was really noticeable.

Having just flown into the USA from Australia I was really noticing the difference between the hot Australian summer heat and the cold Washington DC winter – shifting from shorts and cool air conditioning to my heavy winter jacket, beanie, gloves and scarf took a bit of getting used to.  Fortunately I had packed the winter clothing that I needed, although they had been lurking in my cupboard unused for quite some time.

After stopping for a quick look at the White House, I finally working out that all along I have been mistaking the Capitol Building for the White House…  It just goes to show that the movies don’t come with a guidebook.  While the White House itself was an interesting sight, I will happily admit that I probably spent more time admiring the squirrels in the park beside the White House, as it was the first time I have ever seen a squirrel.  I loved how they pause briefly and then all of a sudden dart along at a high pace before stopping again.

I kept walking and after only a few hundred meters more I was able to see the massive Washington Monument.  I was impressed to see just how high the Washington Monument is, and sitting surrounded by beautiful green grass it certainly is the centre piece of the National Mall.

I walked up the gentle hill to the Washington Monument entry and was advised that I needed to get a ticket to enter, and I could see two groups queued up waiting to enter.  I was directed to a tiny house which sits to the eastern side of the building.

Exploring the Reflection Pool and the Lincoln Memorial

I obtained a ticket and then returned to the entry queue, and after speaking with the other people in the queue I realised that while I had been given a timeslot, they were running really late and there was the potential for me to stand in the queue for over an hour.  I decided to take a risk and walk to the Lincoln Memorial which I could see in the distance, and hope that I could get back in time to still enter the Washington Monument.

The walk from the Washington Monument to the Lincoln Memorial goes past the World War II Memorial and the Reflecting Pool.  As I was short on time I quickly walked past and then down the right hand pathway beside the Reflecting Pool, which was mostly covered in ice.  I really enjoyed the leafless cherry tree covered walkway, as there was mostly only myself, a few intrepid joggers and the odd squirrel along the way.

I have seen photos of the Lincoln Memorial before and I was surprised to see that the actual statue of Lincoln was a lot smaller than I expected (although it is still quite large, as you can see in the photo below).

I then briskly walked back to the Washington Monument, and was fortunate that I had not missed my slot and was able to join the queue to enter, after quickly realising that it was a very bad idea to try to sit on the stone waiting benches in the middle of winter – someone definitely forgot to include heating inside the bench…

After passing through security I then had to sit and wait for my group’s turn to go into the elevator to ascend to the top of the building.  We quickly ascended to the top floor of the Washington Monument where we were able to take our time to take in the amazing view.

Even though by then there was a grey and overcast cloudy sky I could still clearly see the amazing views over Washington DC.  Above each window was a detailed photo of the view from the window, along with detailed explanations of what we were seeing.  I found the guides very helpful as I had not done any research to do any sightseeing in Washington DC as in my original itinerary I did not have any time to sightsee.

I really enjoyed the views across the wintery Washington DC and was glad that I had decided to ascend the Washington Monument.

To exit the Washington Monument we had to descend one floor using the steps which took us to the museum level which explained the history of the Washington Monument which was a fascinating read.  There were many people on this level and unfortunately there was not an option to walk down the stairs which would have been a much faster way to depart the building.  It felt like I waited close to 30 minutes before the elevator arrived and I was able to descend – along the way they slow down the elevator and make the windows clear so you can see the internal staircase and plaques from people who contributed funds to help build the monument.

I stopped back in to the small shop beside the Washington Monument to purchase a map and some gifts for my children before starting the walk back to my hotel.

Making the Most of a Short Visit to Washington DC

I am really pleased that I made the effort to explore Washington DC even for just a short period of time, as I now have a much better understanding of American history and appreciation of this amazing city.  In three hours I was able to explore only the centre and western end of the National Mall, so you could easily spend much more time exploring at your leisure.

Options to Get Around Washington DC

While I was walking around I purchased a great laminated map of Washington DC which gave a great overview of the National Mall area.  After looking at a few options in the shop and using the map I have no problem recommending the StreetSmart Washington DC laminated map to you.

If you are staying close to the National Mall area you can easily walk around the entire area.  The distance between the western and eastern ends is 4.5km / 2.8 mi so it is a very big walk.

The Capital Bikeshare Scheme in Washington DC enables you to pay a small fee to hire bicycles from any station.  You can use a credit card to purchase either a one day or three day membership, and during that time you can hire as many bikes as you like for a maximum of 30 minutes each for no additional cost.  Extra fees are charged if you use a bike for more than 30 minutes.  You can pick up and drop off the bikes as each bike station as you require.

Bike Stations are located at each tourist attraction around the National Mall so this is a great option to get around easily.

The Washington DC Metro System provides options to get around the National Mall area.  The train line sits underground and there are stations close to the White House, The Washington Monument and Capitol Hill, however there are no stations close to the western end.  There are also buses which service the centre and eastern end but also do not service the western end.