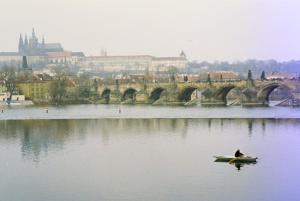 Christmas 2012 will be the twenty year anniversary of my first independent big trip to Europe.  I decided to go with only six months’ notice after a rather liquid (I still can’t drink bourbon ever again) 20th birthday celebration with friends.

At the time I was taking pilot lessons and I had to make an important decision – was flying my future or was a big trip more important, as I could not afford to do both.  The big trip won and I never did get my pilot’s licence.

After toying with whether to book a Contiki style tour or travel independently I accidentally came across a copy of Rick Steve’s ‘Europe Through the Back Door’.  A quick glance told me that this was the book I needed.  I bought it and that evening my eyes were opened to how I could confidently travel independently through Europe.

I borrowed the money, haunted the travel gear shops to work out what I needed and with only a backpack, an airfare, a Eurail pass, a youth hostel pass and travel insurance I headed off on my winter adventure to Europe.

I had planned out a rough itinerary for my big backpacking section which started in Berlin and roughly headed south to Rome over a six week period.  My only booking was my airfare out of Rome.  I felt like a true backpacker when I walked off the airplane in Berlin and had to straight away find somewhere to stay for the night.  My first ever youth hostel experience was positive, if somewhat noisy due to the misfortune of a large school group being booked at the same time.

I still remember my first overnight Eurail trip from Berlin to Prague.  After catching six local trains to get to the right train station (loved the poor connection options between the east and west of Berlin at the time), I arrived after nightfall to see the train sitting waiting to be boarded.  Looking around cautiously, I could see many people of dark ethnic appearance who appeared to have all of their worldly possessions with them.  Looking inside the train from the outside I walked along the train to see who was in each 8 seat compartment.  Along the way I spotted a single compartment which appeared to consist of all women.  I decided that that was obviously the safest place for a single female traveller to sit, so I went in and joined them.  I strapped my backpack to the luggage rack and subsequently endured a very long and sleepless night.  All night people walked up and down past our compartment and I felt very happy I had chosen to sit with the other women.  I could only imagine how vulnerable I would have been if I had chosen to sit by myself.

After a minor issue of finding my visa paperwork as we crossed the border I finally arrived safely in Prague.  I had agreed to meet up with a traveller I met in the Berlin Youth Hostel who had travelled through a day earlier.  I recall seeing a swarm of locals touting accommodation as I exited the train station.  I was surprised when a strange man called out my name!!  And had a note written by my fellow traveller saying that she was staying in his home and he would take me there also.  I decided to go with him, and after a local train ride I subsequently met my fellow traveller in a dreary grey multi-storey apartment block.  Inside the family had given up their own beds to house four travellers.  It just goes to show that couchsurfing and Airbnb is nothing new in principle, just a bit better organised.

It was interesting staying with the locals.  They could only speak basic English, but were lovely.  I learned more about the rampant poverty in eastern Europe which inspired locals to find short term tenants.  I fondly recall having an amazing pancake breakfast on the postcard sized balcony the next morning and watching large puffs of snowflakes falling from the sky across the grey industrial landscape (see photo below from the balcony). 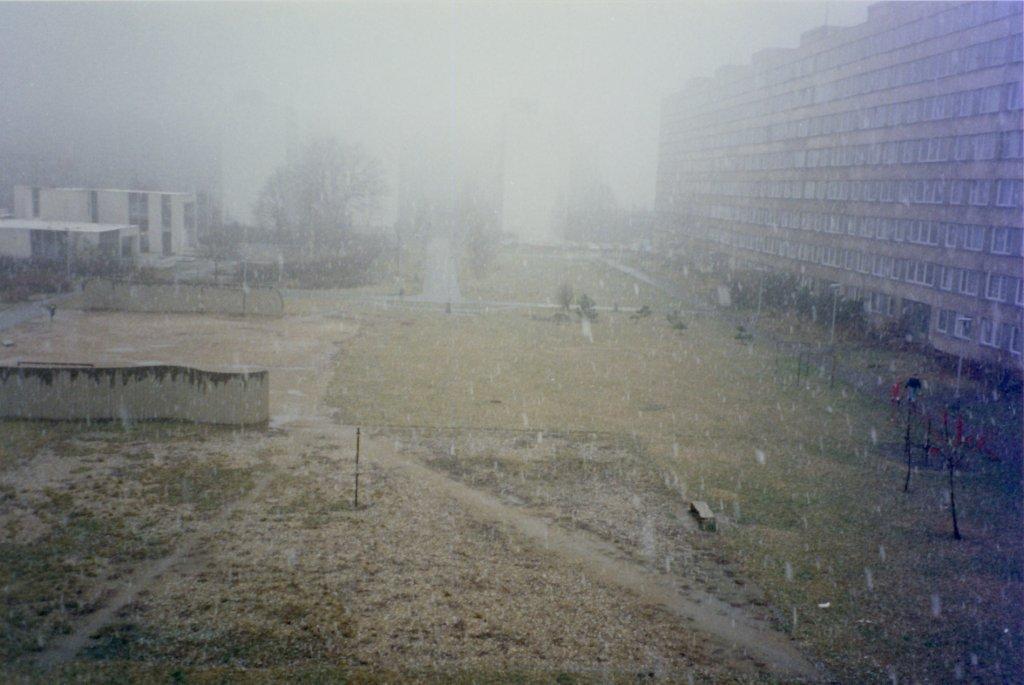 After a lovely stay I then moved on to Munich, Salzberg (where I celebrated Christmas) and then Vienna.  By this time I had become a seasoned backpacker and was well in the zone of finding accommodation and getting to know fellow travellers.  Vienna was the place where I walked on an ice covered lake for the first time, and listened to the ice creak and crack as we walked.

I then moved on to Budapest with a different fellow traveller, and when we arrived just prior to New Years Eve we could not get into our preferred hostel.  As a result we went to a second choice which subsequently turned out to be the worst hostel I have ever stayed at.  There were no locks on the doors so anyone could come and go in the rooms and I did not feel safe, especially when a group  of drunken people decided to have a party in our room.  After not much sleep we decided to check out and try again for the other hostel, and worst case find a hotel if necessary.  After some waiting we were successful and moved into our preferred hostel which was everything we were looking for.

The history of Budapest really blew me away.  In Australia we had just celebrated our Bicentenary.  In Budapest I visited the Millennium Monument which celebrated the Hungarian people having lived in the area for 1000 years – and it was built in 1896.  I felt humbled by comparison with such a weight of history.

In Budapest it also became really cold for the first time and my ears started going numb.  You could see chunks of ice floating down the river.  I came across a small market beside the river where I purchased a lovely homemade woollen beanie, which I still use to this day whenever I venture into the cold.

After an interesting New Year’s Eve – hmmm, fireworks inside bottles is not a great idea…  I headed back to Vienna to continue my trip.  I subsequently visited Innsbruck, Interlaken, Genoa, Cinque Terra, Venice, Florence and finally Rome.

That first Europe trip was the genesis of my love of travelling which has resulted in many more trips over the twenty years since then.  My passion for travel has also been the inspiration for the creation of the Pretraveller blog.

3 thoughts on “First Trip to Europe: Igniting My Passion for Travel”